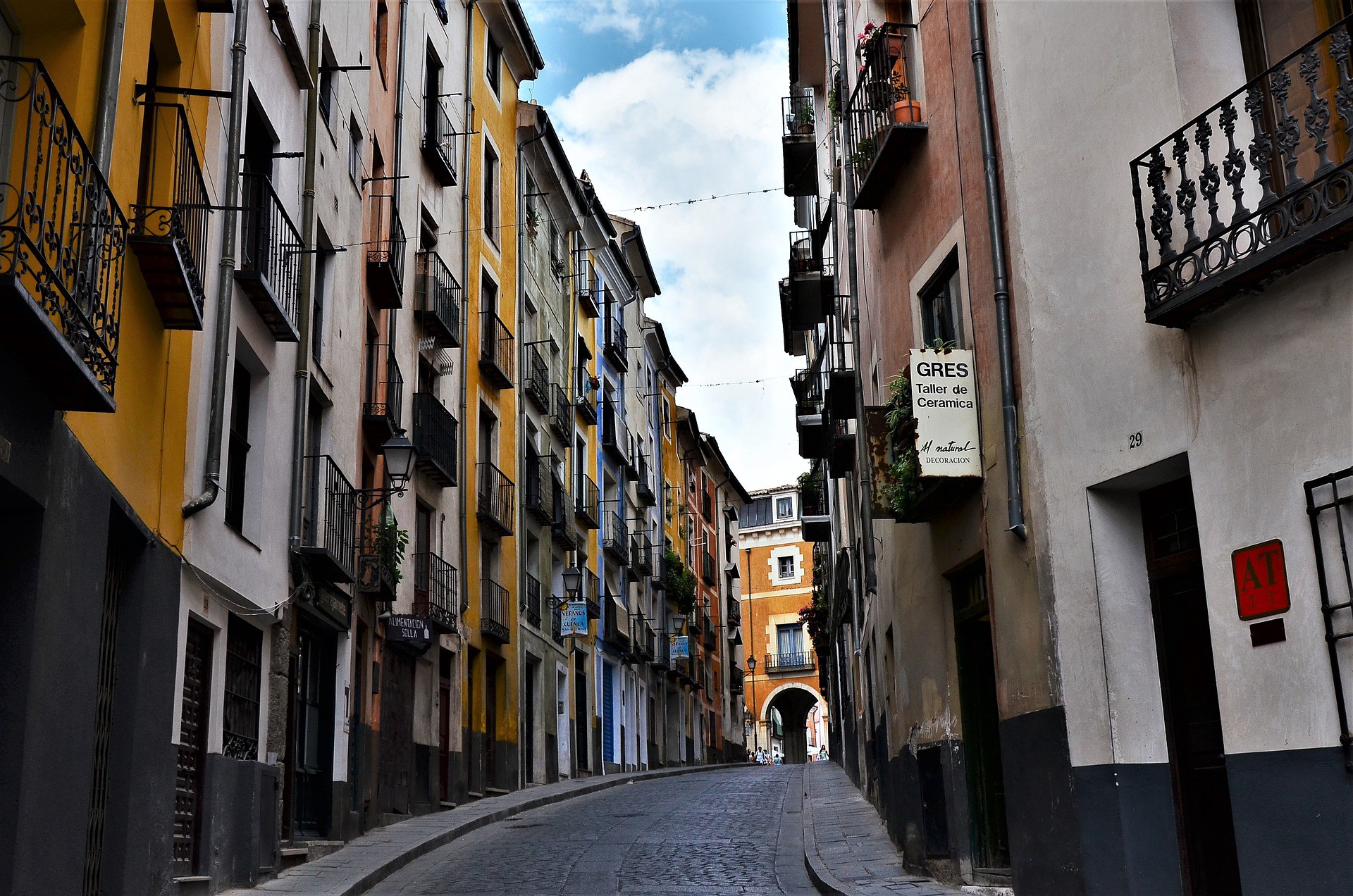 01 What is clustering and what can it be useful for

Clustering has many applications. Most people know it as an unsupervised learning technique. Here, we use clustering to find similarities in observations of real estate listings and allocate similar observations into buckets, but clustering can also be used for other use cases like customer segmentation.

Whenever a new property comes on the market, the question of how it should be priced naturally arises. One good approximation for that is to see how similar properties are priced. The goal here is to define what exactly makes one property similar to another. Clustering can be helpful here to identify which larger category of properties a given property belongs, and which features influence belonging in this category. One can then use the average from this category to get an indication of the price.

Another use case for clustering is to use the cluster information as an additional feature within a supervised prediction model. The reason why that could be a helpful is that a cluster variable provides condensed information to the model. A tree model, for example, has an easier time splitting observations based on one variable instead of splitting based on many variables individually.

To explain that in more depth, let us assume a Random Forest model, which is a special form of bagging. It is special in the sense that it does not consider all features for every tree, but chooses random features for every tree. If a tree chooses the features number of bathrooms and bedrooms but not the number of square meters, it has an incomplete picture. Even though the Random Forest model tries to average out this incompleteness through a majority vote of trees, the tree would have an easier time to have variable which condenses much of the basic information of the property already. That would lead to fewer misclassifications of properties which show an unexpected value for one of their features.

A more elaborate post on the usefulness of using a cluster variable within a supervised predction model is shown here.

Before jumping into any results it is important to elaborate a bit more on how the K Means algorithm works. The first step, and at the same time one of the most difficult steps within this approach, is to set how many clusters we want our data to be split into. This is challenging - how are we supposed to know how many clusters the data needs? We will elaborate a bit later on how to make an educated guess on that number. For now, we will simply call that mysterious number of clusters k.

We start by taking k randomly selected observations from our dataset. In our case, we choose k randomly chosen properties. These are our initial centroids. A centroid a fancy name for the mean of a cluster. Given that this is our first observation within each cluster, it therefore also represents the mean. Afterwards, we assign all other properties left (N-k) to exactly one of the k groups. This is done by calculating the difference between the features of a property to all possible centroids. Having more than one feature requires us to use the euclidean distance for that. The euclidean distance is the square root of the sum of all squared features of a property.

After we have assigned all properties to one cluster, we re-calculate the means (centroids) of each of the k groups. This is done by calculating the simple average of all observations for each cluster. This calculation marks the end of the first iteration.

The next iteration starts again by allocating all properties to one of the k centroids again, using the euclidean distance of each property. It could now be that some observations which were assigned to a certain group change over to a different of the k groups. If that happens, that means that the model has not yet converged and needs more iterations.

After many iterations, no observation will change its group assignment anymore. When that happens, the algorithm is done and said to have converged. This also means that the summed variation of all k groups has reached a minimum. K Means is heavily dependent on which initial values were randomly chosen at the start. In order to test the robustness of the result, it is advised to apply algorithms such as k-means seeding. These methods test different initial values and assess the change in results.

The entirety of the explanation above can also be summarized in the pseudo code below: 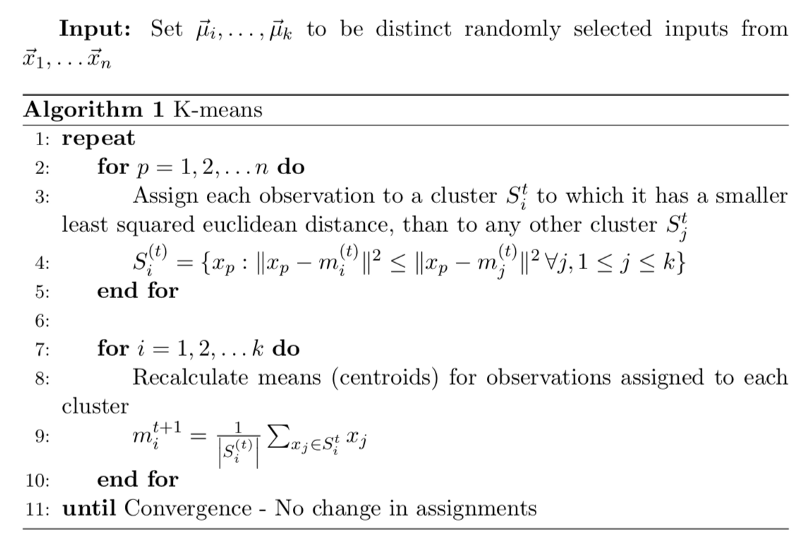 As stressed before, one disadvantage of clustering is the necessity of choosing the number of clusters at the start. This task seems truly difficult since it somewhat requires us to have an initial idea about the data. For cases where we have up to three variables, this problem can be solved by simply plotting the observations and see visually which number of clusters could be sensible.

There are multiple problems with that approach, however. The main problem is probably that “eyeballing” the number of clusters to use based on a plot is not very scientific and very subjective. A more sophisticated approach is the silhouette score, which is explained in the next section. 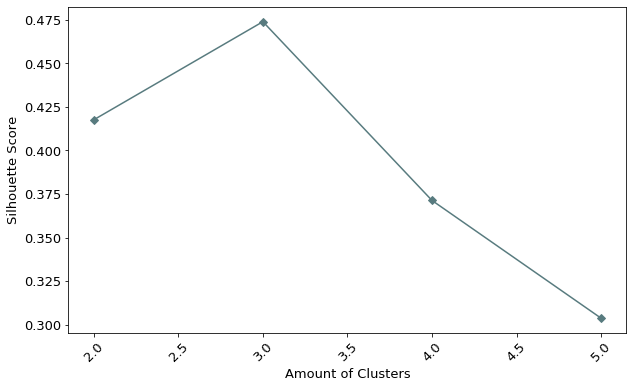 When implementing K Means, it is important to start by figuring out which value k should take using the silhouette score.

As seen above, when implementing the silhouette score, we have to state the number of clusters from the start. For our example we tried all cluster levels up to 5. It is important to allow for a relatively high amount of potential clusters. Otherwise, it could happen that the calculation will be only able to find a local minimum.

The second step is then to implement the K Means algorithm with the optimal value of clusters, namely three. This is relatively easy and shown below.

It should be said that before feeding the observations in any of the clustering algorithms, it is advised to first standardize the data. This ensures comparable scaling of the variables.

After deciding for three clusters, it would be interesting to see how the data was split. As discussed before, plotting the variables and highlighting the cluster gets difficult whenever more than three variables are at play.

One workaround is the usage of Principal Component Analysis (PCA). What PCA does is to compress the information of many variables in a selected amount of fewer variables. The graphic below shows exactly that - here, we have projected all the feature variables onto a 2-dimensional plane for plotting.

First, the variables #of bathrooms, # of bedrooms, # of squaremeters, longitude and latitude are used to build exactly two principal components. Afterwards these two newly created variables are plotted. The color of each point shows its assigned cluster group. 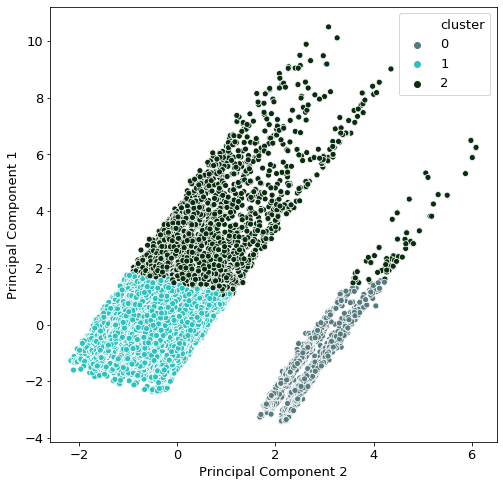 At first glance, the clusters don’t look very intuitive. It seems that we have two islands of observations, one larger than the other.

Given that we are in possession of the location data of the properties, it is also interesting to see how the clustering is spread through the country. One very interesting observation here is that the grey-blue dots are mostly solely in Gran Canaria, whereas all other observations are in Peninsular Spain. This finding explains the two “islands” seen in the original PCA graph. 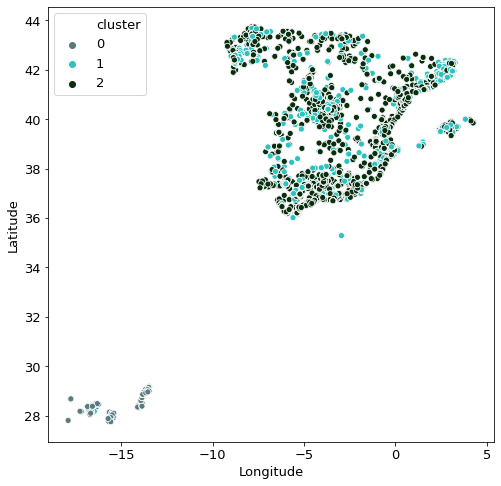 The other mystery that remains now is what causes the two cluster groups within Peninsular Spain. This can be explained with the other variables. The 3-D plot below shows the other 3 features and shows that the cluster group one shows more extreme values for all variables compared to cluster group two.

In the upcoming posts we will use the cluster group as a feature in our prediction model. So stay tuned to read about the performance of this variable!